Thank you for inviting me to speak on the prisons situation in Syria.  It is difficult to discuss the prisons in Syria without discussing the enforced disappearances in these prisons too.  Enforced disappearances in Syria became very common in the late 70’s to the point where we have more than 17,000 cases reported since 1979.  Although these disappearances did not happen during the term of Bashar Al-Assad but he has not done anything to resolve this issue with the families of these disappeared individuals and this issue will not disappear until it is dealt with.

Since the year 2000 until now the number of prisoners of opinion in Syria is estimated at about 4500 prisoner.  Most of these prisoners have faced a period of enforced disappearance that will vary in length from few days to several months.  Two very highly publicized cases to use as examples are the case of Mr. Haitham Maleh 79 years old who was abducted on October 14, 2009 and disappeared for 6 days and the case of the young female blogger Tal Al-Mallouhi 19 years old who was arrested on December 27, 2009 and has disappeared until recently. We now have unconfirmed news that her parents were able to visit her in a prison in Damascus only few days ago.

Also, there is the case of Ayat Issam Ahmad who is a 22 year old college student and she was arrested for having a “salafi thoughts” Ayat has disappeared since October 2009 after security forces raided her family house and confiscated some Islamic books and a computer.  Last month we found out that she was released from detention after a disappearance of almost 9 months.

Not to forget the case of Nizar Rastanawi who finished serving a 5 year sentence in 2009 and he has not been released since then and has disappeared.  Some believe he was killed under torture.

This brings us to the issue of systematic torture and the cases of death under torture in Syrian prisons.  When you talk to any of the released prisoners regardless of their age and the length of their detention you will hear stories of beatings and torture using all kind of tools.

Physical and mental torture is still applied as a punishment style or to extract information in the Syrian security branches among of which the Criminal one. There are many torture methods applied in those branches among of which are: torturing with water, burning with cigarettes; hitting with electrical cables; wind carpet; slashing, hitting and kicking, whipping on the feet, insulting; threatening to torture the family members: wife, mother, sons, daughters or other relatives.

Torture led to many deaths especially among Kurdish detainees after the Kamishli incidents.

Here are some cases of death under torture as examples and not a comprehensive list for the sake of time:

Syrian Kurdish citizen Ahmad Mamo Kanjo was arbitrary detained on March 15, 2004 on the background of the sad incident of March 12, 2004 he was beaten by a military security officer with the end of an automatic weapon on his head that caused a 10 cm cut in his head which lead to his transfer to the hospital. While he was there marks of systematic torture were seen all over his body. Later the administration of the mental hospital in Aleppo delivered Mr. Kanjo to his family. He appeared to be in an abnormal bad health and was complaining of continuous pain in his head, loss of balance and foggy vision.  Doctors stated that the cause of his death on May 13, 2004 was due to a severe internal hemorrhage in the brain that was caused by the systematic beating during his two months of arbitrary detention.

Firas Mahmoud Abdalla was killed at the criminal security center in Damascus while he was being interrogated by them on January 7, 2004.

On the morning of Saturday January 10, 2009 a military security patrol delivered the body of Mohammad Ameen Al-Shawwa to his family in Deir El-Zour, four month after he was arbitrary detained on the suspicion of being an Islamist.

By 3:00 pm his body was buried, his family was not allowed to carry on a proper burial ceremony. Mr. Al-Shawwa born in 1966 in Deir El-Zour, he was a math teacher, a husband and a father.

Ahmad Saleem Al-Shaikh, he was born in Damascus in 1970, married and a father of four children. At 7 pm on the evening of Tuesday November 6, 2007 in an area called Rukn El-Deen in Damascus, Mr. Al-Shaikh’s car was stopped by the members of the criminal security he was pulled out of his car in front of his wife and four children and beaten to death in the street.

Abdullah Elias Al-Bitar of Dara’a province, 33 years old, married and a father to one child.  He was employed by Bimo Bank in Damascus. He was detained by the Criminal Security branch for forty days on the suspicion of money theft from the bank where he was employed.  Severe torture while being interrogated lead to his death on October 27, 2008 and his body was delivered to his family two days later on October 29, 2008.

Jalal Hauran Al-Kubaisi, born in Damascus in 1977, he passed away on Monday May 31, 2010 while he was illegally detained at the Damascus criminal security branch.  The cause of death was severe beating.

Mr. Haitham Maleh stated in his enforced disappearance account sent to me from Adra prison the following: “In the room there was – the German anguish – cable and a cut-out piece from a car tire 4 cm wide and 40 cm long they are used to beat prisoners with, as I heard their screams with my own ears, also there was an electric cable on the table, behind the door there was a metal container, which is filled with fire, I do not know how it is used though.”

Prison conditions are horrible to say the least.  For example: Mr. Haitham Maleh prison cell is about 60 square meters shared with 60 other common criminals.  For a prisoner to go to the bathroom, he must step over bodies lying down on the floor.  Mr. Maleh sleeps on a thin mattress on the floor.  He is denied access to his medications.  His lawyers are not able to speak to him freely.  Mr. Maleh is always accompanied by a prison guard, unlike other prisoners, when visiting the prison doctor.  Mr. Maleh, is denied access to any reading materials and not allowed to visit the prison library.

Of course his situation is very similar to other prisoners of opinion as you have seen in the letter from Adra prison that most of you have received a copy of in an email from Mrs. Maureen Thomas of Amnesty International UK.

Syria detention centers are countless almost there is one on every street corner. Every security branch has a basement that is used for detention and torture. To give you an idea I am going to mention a few of them that are located in Damascus city only and all of these have branches in every other city in Syria:

Political security branch in Al-Mezza, which also has two other branches in Al-Faiha and one more in Al-Maysat.

Military security branch in Al-Jamarek, which has several branches too one of the most important one is the Palestine branch and it is located near Al-Jamarek circle.

The headquarters of the general security in Kafar Souseh. (My father spent several years detained in this one in the 1980s so I am very familiar with it).

Internal security branch (State Security) in Al-Khateeb area. (I have firsthand knowledge of this branch as I had the honor of getting detained and beaten there when I was 19 years old).

Criminal security branch for Damascus city in Bab Musala area, and for the Damascus suburbs another branch is located in Harasta area.

Before I conclude I would like to mention briefly the struggle of the lawyers who try to defend the prisoners in Syria where impunity exists for those committing human rights crimes.  Beside the harassment they get from the security apparatus, they also face harassment by the Syrian Bar Association which is not an independent entity and it is an arm of the regime.  A clear example is the case of Mr. Muhannad Alhasani who was disbarred for life from practicing law for monitoring the State Security Court hearings and reporting on them and for forming a human rights organization.  Then, when they are imprisoned themselves other lawyers are not allowed to visit them to discuss their defense as they have to get permission from the Bar Association in order to do so.

I was under the impression that the horrible life in Syria as I knew it is gone with the passing of Hafez Al-Assad and that it is changing for the better.  But, as I and I am sure most of you hear from those living in Syria the situation remains as horrible and its getting worst some tell me from inside Syria that the Syria society is on the verge of collapse.  I do beg you to do what is in your conscious and what you have sworn to uphold, and help the Syrian people get the minimum rights they deserve.  It is the Syrian people the friend you need and not the Syrian government.

Tomorrow the EU Commissioner will be meeting with officials in Damascus regarding the EU-Syria Partnership Agreement.  Signing an unconditional agreement at this stage with a criminal regime will only make the EU an accomplice. Engagement with Syria is very important but not on the cost of human rights.

Oral intervention at the EU Parliament’s Human Rights Committee by: 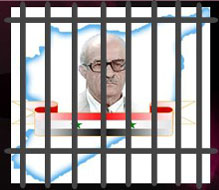